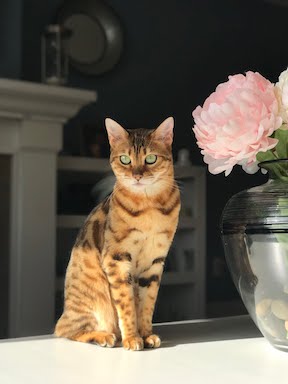 The symptoms of when a cat won’t stop itching

Bindi, a beautiful 8-year-old, female, Bengal cat, came to see me for a second opinion. She had a serious skin condition that was not improving with previous treatments. The poor kitty had many reddish, very bald areas on her body. Her mom said she would not stop scratching and there was evidence that she was causing herself harm with all the biting and scratching she was doing to relieve the itch. Her previous veterinarian had been treating her with topical medications and a cone around her neck to prevent further self-excoriation. This poor cat won’t stop itching, magine how uncomfortable Bindi must have been!

The first order of business was to stop Bindi from scratching, so I started her on steroids which are usually good at reducing an itch. I also started her on a round of antibiotics to heal her skin lesions. These helped a little bit but, honestly, not as much as I’d hoped. That’s when I had a long conversation with Bindi’s mom about the food she was eating, and we decided to see if Bindi was reacting to her food.

Unfortunately for us, Bindi really liked her familiar food and was very adamant that she wanted no part of any diet change. We went down the list of 4 diets that function as food allergy trials, but you know how cats can be. No amount of coaxing worked and Bindi was not having any of it!

What to do? Bindi hadn’t responded to steroids as well as expected and that’s why I suspected food allergies so strongly. Food allergies don’t typically respond that well to steroid treatments, but what were we going to do since she refused all the diets we tried?

At this point, I added another medication to help relieve Bindi’s itch, but that too didn’t seem to give her any additional relief. I decided to run some other skin tests to rule out some other conditions. We tested for ringworm and other organisms in her skin that would cause itching, but there were none to be found. I did treat her for mites anyway, just in case there were only a few of them that were hard to find.

Nope, no relief for Bindi. So, I tried yet another kind of medication that helps with itching — but also with anxiety.  I thought perhaps she was suffering from an unusual behavioral condition but, as I bet you can guess, this didn’t help Bindi either.

An unusual diagnosis when a cat won’t stop itching

The cat won’t stop itching and has a serious skin condition that was clearly challenging, but I had another idea that might explain what was going on. As I have seen before, cats who are allergic to food can also be allergic to other things, like grasses, trees, molds, and even dust mites!  I thought that if she had some sort of environmental allergies, we could treat for those. Then, if she also had food allergies, taking care of the rest of her presumed environmental allergies might make the food allergies much less bothersome to her.

So, we took some blood and sent it to a special lab to test for reactions between her blood and many things in the environment around her. Her results indeed showed that she was allergic to dust mites, some grasses, and even some fungi (not so fun!). Then, the same lab made up a special serum that, when given over time, would desensitize her to these allergens. This is very similar to people who go for allergy shots.

Unfortunately, desensitization can take months to work. So, we used whatever medication gave her the most relief until hopefully, she wouldn’t need it anymore.

Not a cure, but a solution

It took almost a year but it worked!  Bindi is rarely itchy anymore and we are able to discontinue all her other medications! Her mom is so relieved to have answers for her little girl!

As many of you may know, even if your allergies are well controlled most of the time, they can sometimes flare up.  Same with Bindi. During these times we give her steroids because, Interestingly, they actually work for her now!  Apparently, desensitizing her to several of her environmental allergies actually allowed her body to respond to steroids if, and when, they are needed.

We are all so happy because we now know how to help Bindi feel like herself in her own, nicely healed skin!!