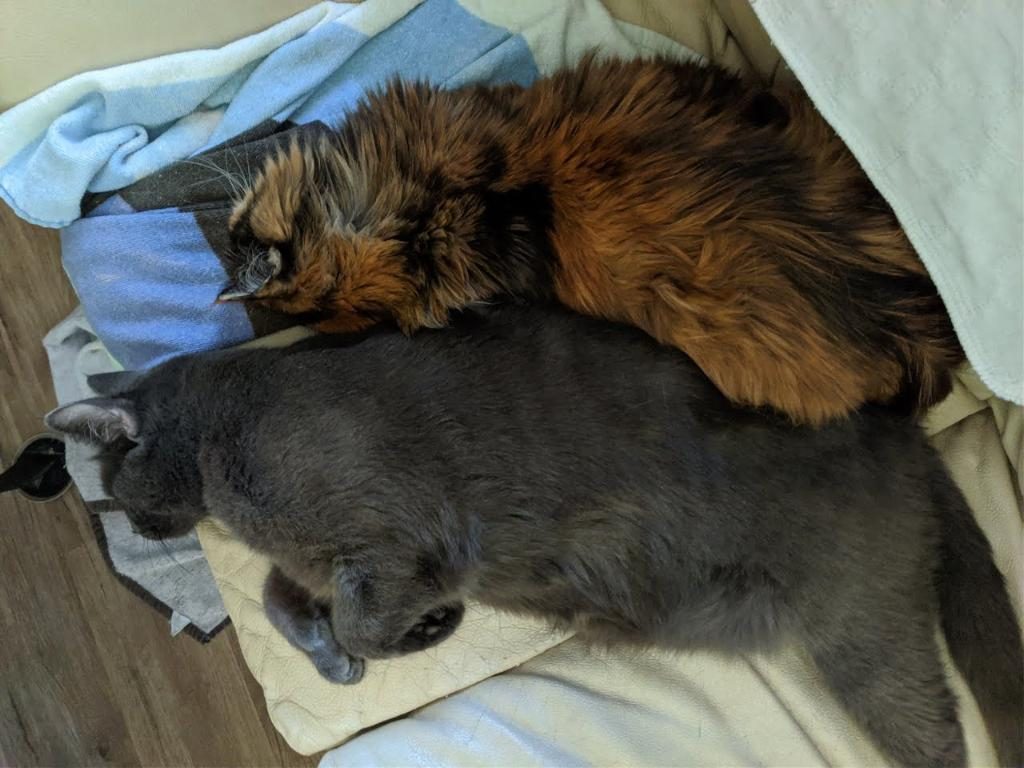 Lately, I have been seeing quite a few cases of a specific illness in my feline patients. Cats are coughing and their human parents don’t know why. Is it allergies? Asthma? Something worse?

Do the easy tests first

One such cat that came into the clinic is Sapphire; a beautiful, long-haired, tortoise-colored, ten-year-old kitty. She was coughing and had some upper respiratory issues. To help me with my diagnosis, I took some chest x-rays but her chest looked completely normal. I also checked her blood counts to look for signs of inflammation. Those were normal too!

These tests ruled out serious diseases like pneumonia and cancer (I always worry about them!), so I decided I would treat Sapphire with a steroid injection for possible allergic bronchitis or asthma. After all, it was spring and we were all suffering!

Initially, Sapphire responded to the steroid injection and stopped coughing, so I had her mom continue the medication orally. Well, about a week later, she started coughing again—even on the oral steroid medication! So, I knew allergic bronchitis and asthma were out because those illnesses normally respond nicely to steroids.

Shortly after, Saphire’s kitty brother named Carter started showing the same symptoms. Hmmm. He was relatively new to the household so it was even more puzzling. Then, I remembered dealing with an organism that can cause walking pneumonia in humans. The patient feels fine but has a really annoying cough. It’s called Mycoplasma and the reason I know about it is that I’ve had it twice. Was it possible that these cats have that too?

Let’s not traumatize our cats

Mycoplasma can be very hard to test for. It likes to hide. There is a very expensive test that we could have run to find out why the cats are coughing called a transtracheal wash. But the patient has to be under anesthesia while saline is pulsed and retrieved in order to get fluid from the lungs to test. Not everyone wants to put their kitties under anesthesia, which I completely understand.

So, I decided to treat these cats prophylactically, without any expensive and traumatizing tests. The medication I used is called doxycycline, which I knew would most likely get rid of Sapphire and Carter’s Mycoplasma infections. And, while I obviously prefer to know exactly what the underlying problem is, this medication is usually so well-tolerated and has so few side effects, that I decided it was safe to move forward (it is also relatively inexpensive.)

After both cats were put on a course of doxycycline, their upper respiratory symptoms were gone! And although I couldn’t prove that the culprit was Mycoplasma, I’m pretty sure this was the proper diagnosis due to their successful response to treatment.

It should be noted that there are other reasons why cats are coughing besides Mycoplasma. Pneumonia, asthma, allergic bronchitis, and lung cancer are all possibilities although as I said previously, we tested for those and pretty much ruled them out in Sapphire and Carter. Another possibility is a lungworm infection, a parasite that gets into the body and finds its way to the lungs, and causes symptoms. Heartworm disease, also a type of worm that mosquitoes transmit, can also find its way to the lungs and cause coughing.

If Sapphire’s and Carter’s symptoms had not resolved, other tests including the transtracheal wash would have been required. Luckily, I was able to stop looking because both of my sweet patients were 100% better!

So, if your cats are coughing, please take them to your veterinarian right away. Some causes are more serious than others, but it’s always best to get help quickly. Our felines deserve to be cough-free and comfortable as quickly as kittenly possible!