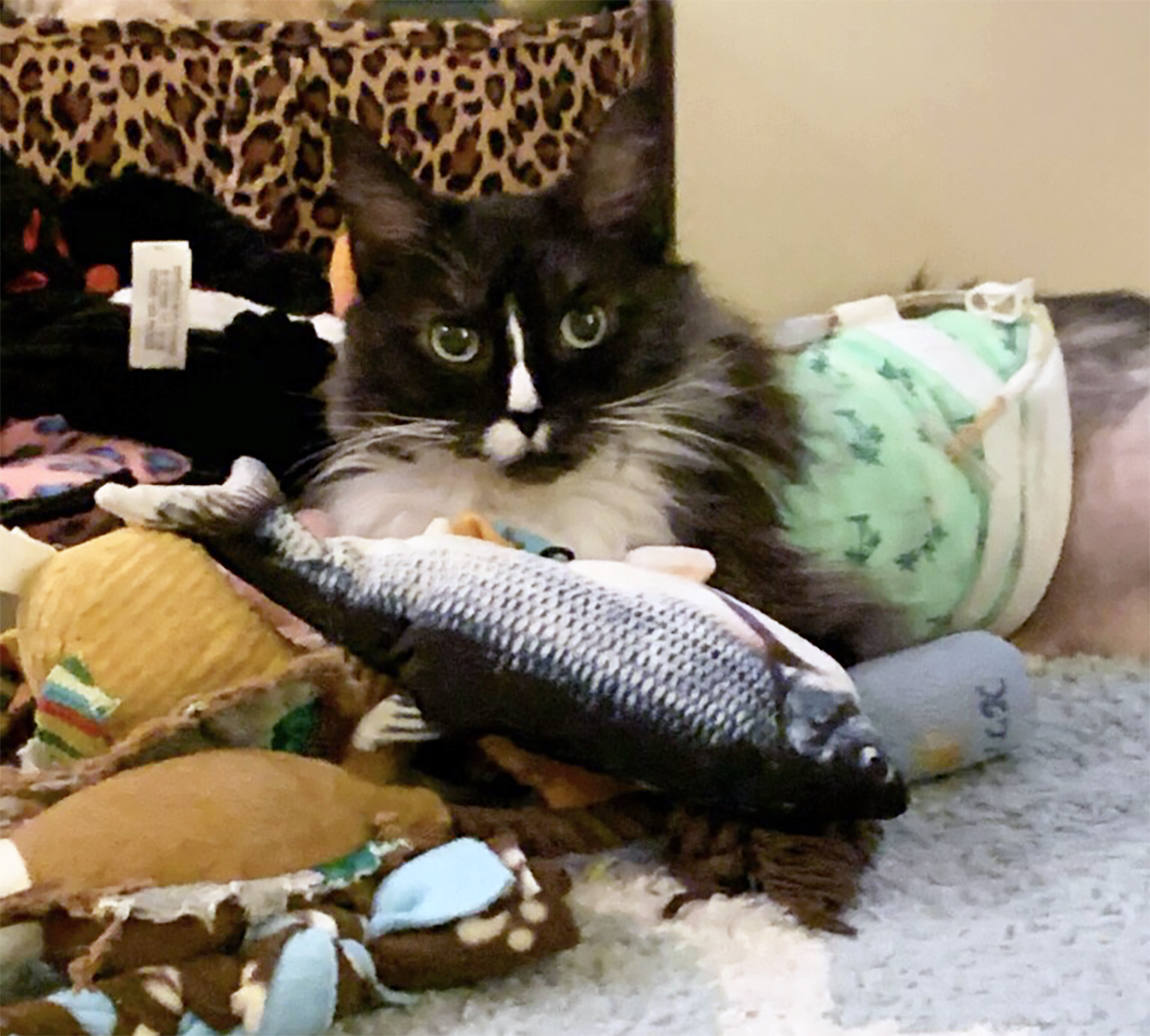 A few months ago, I introduced you to Emilee’s (my receptionist) cat, Miranda, who was fighting both an autoimmune disease called Pemphigus and a serious skin infection. Today, her Pemphigus is under control and the skin infection has resolved, but, as luck would have it, Miranda developed something new for us to worry about.

Just as we were getting the previous diseases under control, Miranda began having a difficult time eating. She could get the food into her mouth but would have a terrible time getting it down. It would usually just come right back up and this left Miranda very hungry and facing weight loss. Miranda and her owner were about to encounter two more big obstacles blocking her path to recovery from the Pemphigus.

To determine what was causing this, Miranda was referred to a specialist and who performed an endoscopic procedure, While under anesthesia, she had a tube with a camera placed down her esophagus and into her stomach. The doctor determined that she had a feline stricture, or narrowing, in her esophagus. The tissue lining her esophagus became so thickened that it was preventing the food from traveling forward through her digestive tract.

Strictures can happen for a few reasons but the most common is called “dry-pilling.” When you force a pill into the back of a cat’s mouth, the reflex to swallow takes it into the esophagus, but as it goes down, it sometimes gets stuck on the wall of the esophagus and causes a lot of inflammation. This kind of inflammation can cause thickening of the esophageal wall, which can create a stricture.

A Dr.Katz CAT-TIP: There are certain medications that are more likely to cause a feline stricture than others. To be on the safe side, I recommend following up dry-pilling with a syringeful of water. Wrapping the pill in some wet food can also work to prevent strictures.

Strictures can form from acid reflux. Under normal conditions, the esophageal tube doesn’t contain any acid. But sometimes, acid from the stomach will travel backward up into the esophagus. The delicate lining of the esophagus cannot handle the pH of the stomach acids and as a result, the acid can erode the esophageal lining. But it does not end there. As the body tries to heal the erosion caused by the acid, it can develop scar tissue that, if thick enough, will act as a stricture. We suspect this was the cause of Miranda’s inability to pass food into her stomach.

Ballooning. A low tech, yet very effective treatment for a feline stricture.

The way to treat a stricture is by a process called ballooning. Under anesthesia and over several treatments, the doctor places a synthetic balloon at the site of the stricture and inflates it to stretch the esophagus.

Until Miranda’s stricture was stretched wide enough to let food pass, she couldn’t ingest anything by mouth and needed to have a feeding tube placed directly into her stomach.

While Miranda’s stricture was unrelated to her autoimmune disease, her weakened immune system allowed her to develop a bad skin infection at the site where the stomach tube was placed. Poor Miranda needed her bandage changed frequently to treat both the skin infection and protect the tube site — and she really didn’t like this at all!!

Luckily, we found just the right antibiotic to heal the infection, and after a few weeks, she is much more comfortable. Best of all, after several ballooning treatments, her stricture is almost gone and she is actually eating regular food by mouth again!!

Moving forward, we hope it will be smooth sailing for Miranda. She has been incredibly strong during all this adversity, has proved that she is one tough cookie and that cats really do have nine lives!!