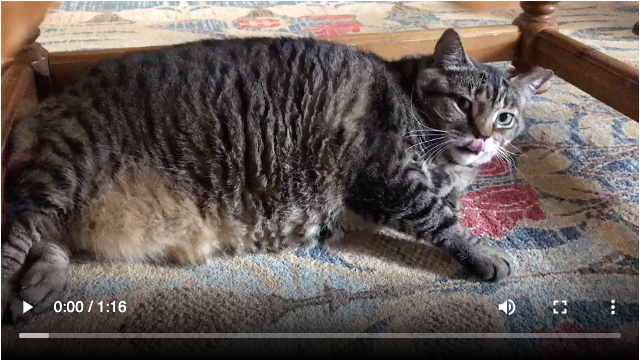 Prima, a 10-year-old, beautiful kitty, came to see me with a symptom I’ve never seen before.  The owner said she’d been having unusual episodes every 1-2 days. Prima would lay on her side while her belly heaved in and out. Then she would have a big swallow and the episode would be over until the next time.

The owner thought she was trying to vomit, but she never did. She also drank water on her side and her appetite was low.  She was currently eating a diet consisting of dry food.

From the video the owner sent me, I could tell this was very different from a cat going through abdominal heaving (preparing to vomit, we’ve all seen that!) When I examined her physically, I noticed that Prima was overweight and she really didn’t like when I pressed on her belly.

I took x rays, which showed some thickening of her intestinal lining. I usually see this when cats have inflammatory bowel disease. I also ran some blood tests, the results of which were all normal. Puzzling.

I put the pieces of the puzzle together in my mind and was fairly convinced this was a variant symptom of inflammatory bowel disease. Typically what I see with IBD is one or all of the following: vomiting, diarrhea, low appetite, and constipation which are all effects of inflammation. When the bowel or intestinal walls are inflamed, it can cause different types of pain depending on which part of the intestine is affected. It’s just like when any part of your body is inflamed. It hurts!  So when I saw this cat’s episode on video, all I could think of was, “This cat’s belly hurts!”

Why inflammation is bad

I want to make two points about this cat and what may have led to inflammation. These are just speculations, but they may be helpful.

Firstly, this cat was overweight, most likely due to a diet of dry food. Fat tissue has recently started to be known as its own organ and it is pro-inflammatory. This means that just by being overweight, this cat may have been predisposed to having an inflammatory condition.

Secondly, (and this is my personal opinion based on research I have done), I feel that a diet of dry food sets cats up for inflammatory conditions, and I will tell you why. Dry food is very high in carbohydrates and cats are not meant to digest those. In fact, a mouse is only 2% carbs!  Evolutionarily, cats have limited ability to digest carbs, so when the digestive system is presented with a high carb diet, it overworks the intestines and causes a snowball effect of inflammation. This is similar to people who have leaky gut syndrome.

Ultimately, I put Prima on a trial of Prednisolone, which is a great anti-inflammatory medication.  It’s been about two weeks since I saw her, and not only has she not had any further episodes, the owner says she is brighter, more energetic, and her appetite has improved. It is my hope that as she feels better, she will welcome a lower carb diet so that the intestines can heal to whatever extent possible. Her owner and I are very excited about her progress!