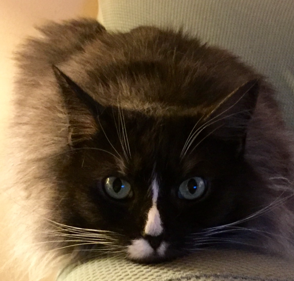 Miranda is a beautiful, 11-year-old, grey and white, long-haired kitty who just happens to belong to my receptionist, Emilee. She was concerned because Miranda had suddenly developed an incredibly itchy ear with no history of ever having skin problems.

When I examined Miranda, one of her ears was very red and had a lot of crusts on it. It had a very “angry” appearance. She was also hairless and slightly crusty around her lips. Initially, I thought it looked like she was having an allergic reaction, but when I questioned Emily about any possible new foods, new litter, or cleaning products she may have used that could have brought on an allergy, she couldn’t think of anything. I treated Miranda with an injectable steroid to see if it would bring the “itch” down.

The next day, the areas in question seemed to get better, but this was short-lived. Miranda developed a fever, which certainly does not go along with allergies. As more areas of crusted, hairless skin began to be noticeable, she stopped eating and became less social at home, I knew this couldn’t just be allergies.

We decided to anesthetize Miranda and take some samples of her skin to be analyzed by a pathologist. While she was anesthetized, we realized that her whole body was turning into one big crusted lesion. Many new sores had come on very quickly. At the time that I sent in the skin samples for biopsy, I also decided to send in a skin sample to be cultured for a bacterial infection.

Once we had the samples taken, I began Miranda on a much more aggressive course of steroids. I had a feeling this was actually going to be an autoimmune disease called Pemphigus in which the body attacks its own skin because it perceives it as a foreign invader.

The steroids helped the fever to go down, but the skin actually got worse while we were waiting for the results. The night before the results came back, my receptionist frantically called me because it seemed like Miranda’s ear was almost melting away as she was trying to clean the painful, crusty skin off.  I began to worry that this was actually a cancerous condition rather than an autoimmune process. She also determined that Miranda was not even itchy at all, but actually in pain at the location of the sores.

The next day we received the results and learned she actually had two diagnoses: Pemphigus Foliaceus and a Methicillin-resistant bacterial infection, or MRSA. I learned that the reason the steroids weren’t working adequately was because of this terrible bacterial infection. In cases of autoimmune disease, it is actually quite common to have a concurrent bacterial infection, mites, or even ringworm disease.  As the body is attacking the skin, the skin’s ability to fight off other conditions and infections is low, making it easy for these other conditions to take hold.

One cat, two conditions. A tough fight for Miranda.

Now that we know what we are up against, we are treating both conditions.  MRSA is treated with antibiotics and will ultimately go away.  Pemphigus will be here to stay.  There is no known cause or exact cure for Pemphigus, there is only management, similar to a person with lupus. We will always be trying to keep it under control with medications that tell the immune system to quiet down. These medications are called immune modulators.  I think of them as volume knobs on a stereo. We can turn down the volume of the music but the stereo can never be completely turned off.  We will also have to watch Miranda for any other infections that may arise because, while the medications are telling her immune system to stop attacking her skin, they will also be less able to fight other illnesses that come her way. I am very hopeful, however, that this is a manageable disease because we and Miranda are ready to fight!

If your cat has a persistent problem call us for an appointment now.