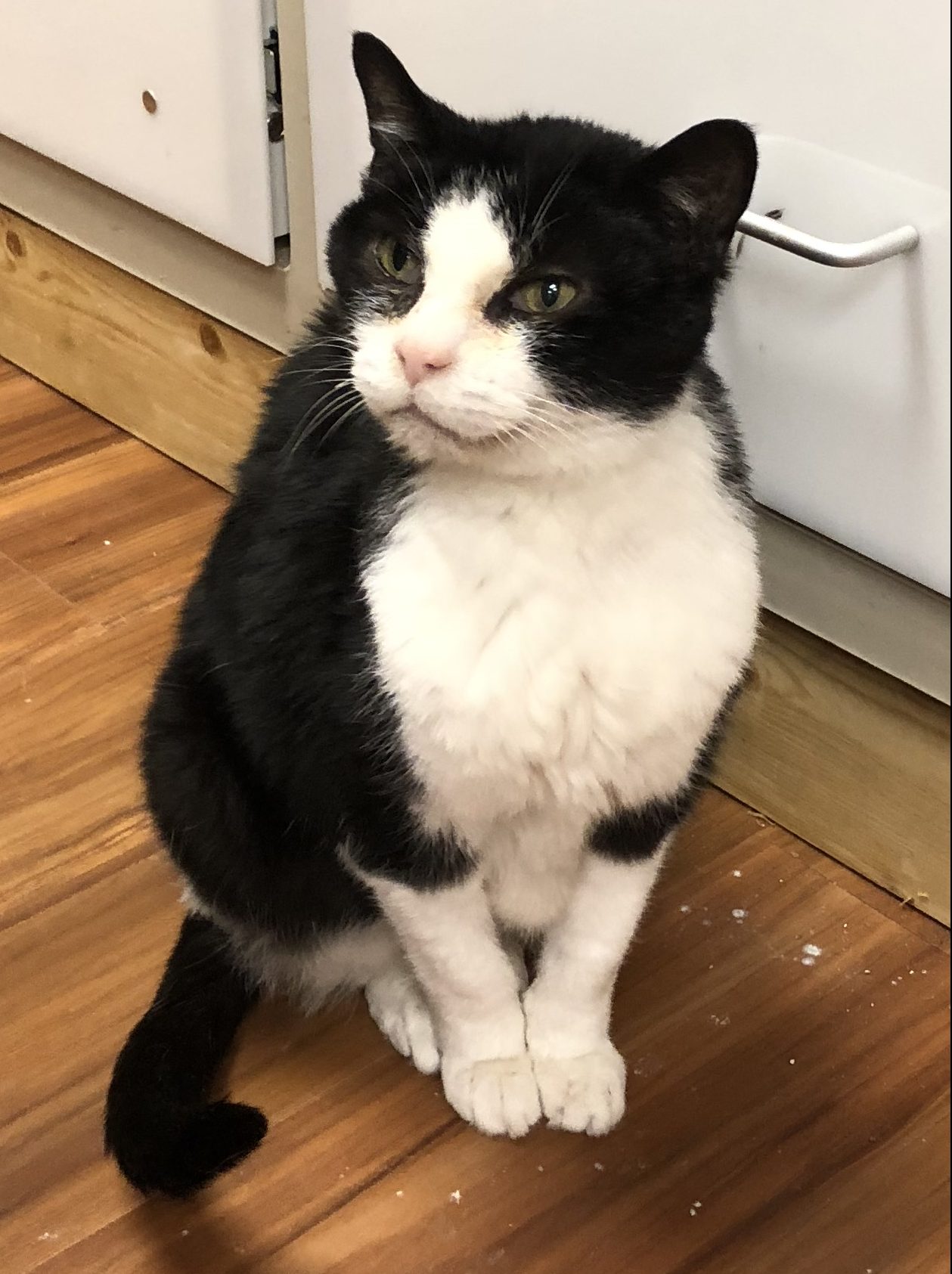 Simon, our famous and beloved house cat, has passed away. As many of you know from Facebook and Channel 12 News, Simon had been left on our clinic’s doorstep in a cardboard box on the morning of January 3, 2018 — one of the coldest days of the year.

When we arrived for work that frozen morning, we quickly ripped open the duct-taped box to find a black and white cat inside. He was not registering a readable temperature and he was very close to death. We managed to revive him, named him Simon, and have cared for him ever since. Channel 12 got wind of Simon’s rescue and he made the evening news — twice! We even wanted to give him his own Facebook Page but Simon modestly declined.

Today would have been Simon’s first anniversary with us and we are sad he will not enjoy the celebrations we had planned for him.

Simon was a senior cat, probably at least 15 years old. Over the past year, we came to learn the chronic illnesses he had most likely been battling before we knew him, and which he continued to fight while living with us. He suffered from pancreatitis, renal disease, and a chronic upper respiratory infection and had to be treated with multiple medications every day to keep his health steady. His health was like a roller coaster, but each time he would start to fail, we were able to bring him back to his happy self. He loved his new life, ate like a champ, and even demanded extra food on most days. We created a “man cave” just for him, which is where he loved to lounge. Simon would often stroll into our exam rooms to greet our patient’s kitty-parents. He really settled into our office — and into our hearts.

Two weeks ago he stopped eating, and the methods we had used in the past to heal him didn’t seem to be helping. We decided to perform an abdominal ultrasound which showed a foreign object in his stomach, as well as 2 masses — one on his liver and the other on his pancreas. I decided to perform surgery in which I excised the masses — and retrieved a rubber band from his stomach. It was an intense operation and he did have some post-op complications, but after 3 days he was as good as new. We waited nervously for his biopsies to come back, but lo and behold, the masses were not cancerous! He was back, eating like a champ and living large!

When I went to feed him one sad morning, I was shocked to find him extremely lethargic and yowling in pain. His temperature was so low that it was not registering, and his color was very pale. An x-ray showed nothing abnormal, so we tried everything possible to bring him back once again — but this time his body could not fight. He died peacefully while I was with him.

We are so thankful for the time we had with Simon. His big personality filled the office but now we have to heal the holes in our hearts.

To whoever left him on our doorstep: Thank you for leaving Simon with us. He lived a lifetime this past year as he made many good friends, received lots of warm hugs — and even got on TV. We are so thankful to have been able to spoil him during his last days.