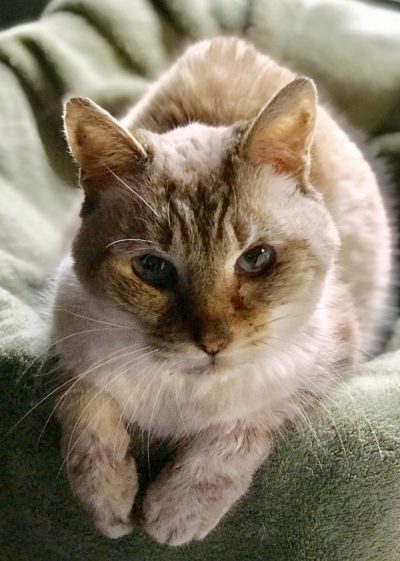 Angie, a 17-year-old beauty, was brought to see me because she didn’t want to eat. She was seen by a few other vets who did some tests and tried some medical treatments, but nothing was helping Angie get her appetite back. Obviously, with a 17-year-old cat, I was worried about conditions that are really bad, like cancer or organ failure. But when I pried open her mouth and saw what was inside, I was so happy to find what I previously suspected, and hoped, would be the culprit. The cat’s gum tissue was very swollen and bright red. Although I knew this condition was quite painful, I was also quite confident that this was something we could manage so that poor Angie could eat her food, once again.

I ran some blood work and took x-rays just to make sure the rest of Angie’s body was healthy. I also took a bit of tissue from her mouth to send to a pathologist. It was important to confirm my suspicion regarding her disease process… and the pathologist confirmed it.

Angie was suffering from Stomatitis, a very painful condition in which a cat feels like their whole mouth is on fire. The gums become intensely swollen because the cat’s immune system somehow believes that the normal teeth are foreign invaders. The cat’s body then mounts a severe inflammatory response to fight against this perceived enemy. The inflammatory response causes so much pain that cats often come into our clinic drooling or showing pain even when I just try to open their mouth. 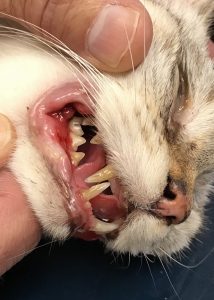 There are a couple of ways to treat Angie’s stomatitis. One is a full mouth extraction, where all the cats’ teeth are extracted under anesthesia. Though it might seem brutal, pulling the teeth is curative for over 70% of cats. Once the gums are healed, the kitty is as happy as can be and back to eating without pain. Believe it or not, cats with no teeth can actually eat just fine!

The second way to try to manage her condition was to treat her with chronic steroids. Though this is not a cure, it works for many cats and is helpful in cases when the owners cannot afford a full mouth extraction, or when there is another health condition for which the cat may not be a safe candidate for anesthesia.

There is also a bacteria that can also cause, or compound, stomatitis. This bacteria is called Bartonella, which a lot of healthy cats harbor, and doesn’t always cause problems. While a Bartonella infection can cause inflammation in almost any part of the cat’s body, it appears most often in the mouth where it infects the gums. Luckily, this infection is usually treated easily with antibiotics.

Since Angie is 17, the owners elected to do the steroid treatment because they thought the surgery would take too much of a toll on her 17-year-old body. And because Angie also tested positive for the Bartonella organism, we also treated her with antibiotics.

After just a few doses of steroids and antibiotics, Angie is back to her old (no pun intended) self, eating well and living pain-free with her loving family.

Please bring your older cats in to see me for a thorough check-up. We have a new, age-10-and-older senior program that will help your kitty live a longer and happier life. Catching disease early, just as in humans, is so important.

See you next month!