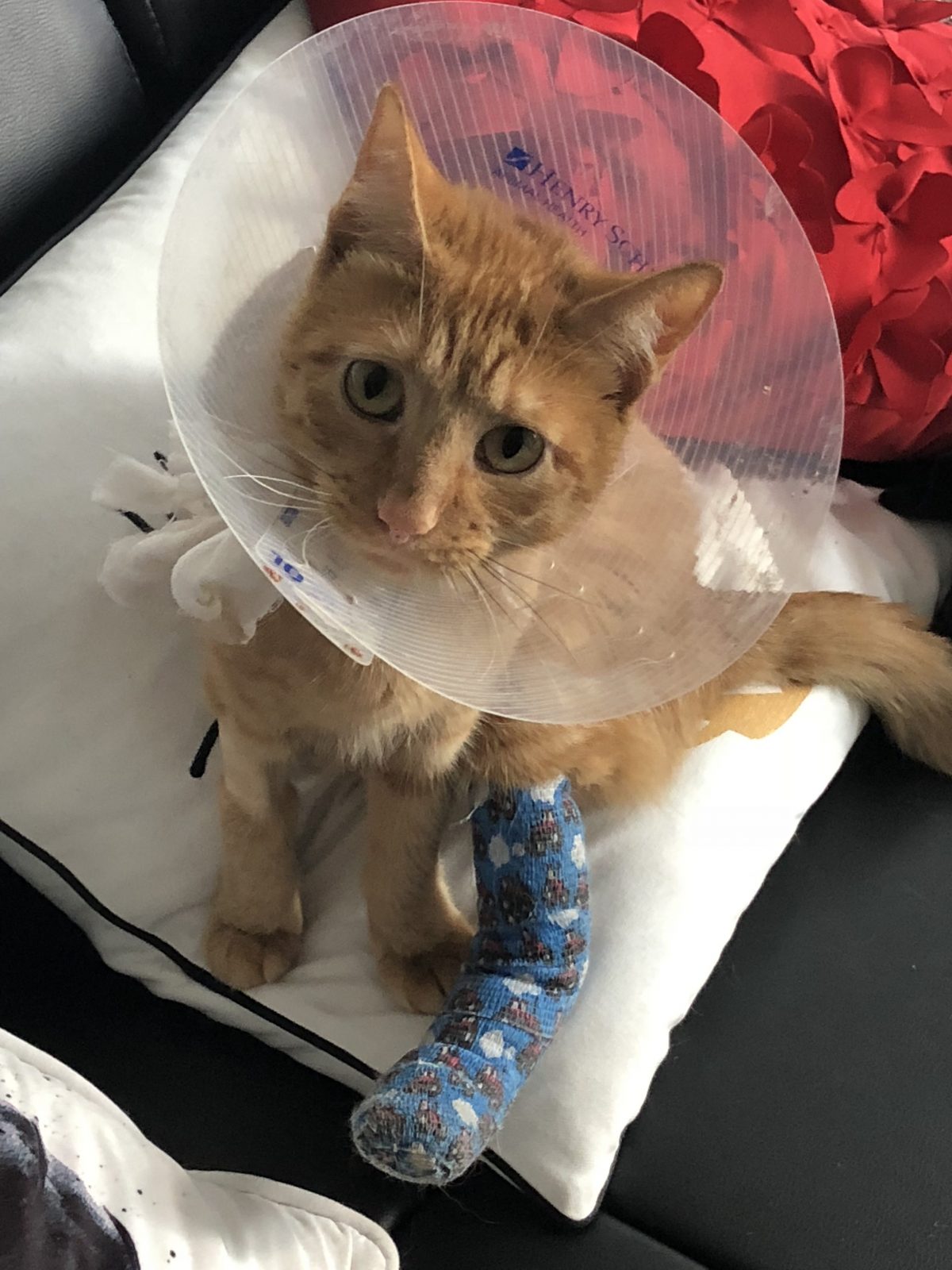 Dexter came to us through TAILS®, a rescue organization that we often work with to help feral and unwanted cats. Dexter was a cat that they trapped to be neutered and released back into his environment.

The diagnosis was serious

We never really know how friendly, or not, the cats are when TAILS brings them to us, but when we opened Dexter’s cage, we found a frightened, but-able-to-be-handled, orange male kitten that we thought had the potential to become adopted. We also noticed that he had a significant injury on one of his back legs.

About 50% of his skin had been pulled off in an unknown injury. The mystery, in this case, was how we were going to treat such a significant defect!

Our first attempt to help Dexter was weekly changes of dressing and bandaging, all under anesthesia because if he were awake, it would have been too painful. As time went by, he developed multiple infections due to the vulnerability of the exposed tissue. But for months, the bandaging helped to protect the tender tissue while new skin grew inward from all sides… and we were hopeful.

A bump in Dexter’s road to recovery

Unfortunately, at some point, the healing growth slowed down significantly and we needed another strategy.  I had read about doing skin grafts using pig skin, but this route was unaffordable for the rescue organization to afford, so, I decided to donate our time to perform a skin graft using Dexter’s own skin from another site on his body. I had never done this before, wasn’t sure how it would work out, but figured, at this point, I would try a graft than go the typical route of just amputating his leg.

The day of surgery, I estimated the amount of skin Dexter would need to cover the defect on his leg.  I then removed the donor skin from the side of his body. After this donor skin was removed, it had to be prepared in a very precise way to maximize the chances of it being accepted.

It was time to do the actual skin graft which included fitting the donor skin over the damaged part of Dexter’s leg. I then carefully stitched the skin in place to the healthy edges of the wound. After dressing the wound with various antibiotic ointments, we bandaged it up and monitored him until the next morning when he went home to his newly adopted family to recuperate.

Dexter had to keep his bandage on for a full ten days. I couldn’t wait to see the results!

Taking off the bandages was nerve-wracking!

When it was time to remove the bandage, Dexter was under anesthesia because I didn’t know if it took or not and didn’t want to risk him being in pain. I was thrilled!! The graft had attached itself to the recipient skin and nearly 75% of it survived to be healthy and viable tissue!

We still had to do bandage changes because there was a small, but exposed, area where the graft didn’t “take.” So, after a few bandage changes, I decided it was time for a second skin graft to close up the remaining area where there was still no skin. Again, Dexter made it through surgery with flying colors and he is presently in his post-surgical bandage.

We have about a week to go but I am very hopeful that this will provide the closure that Dexter needs to be injury free! He is quite the spitfire and was so comfortable with us that he would playfully tear down the hallways before and after his bandage changes.

We can’t wait to see what this young kitty can do once he is fully healed!

(If you wish to see photos of the skin graft stages, click the link below. Warning: these photos are very graphic.)

This medical mystery saved Dexter’s leg and was accomplished through the joint efforts of Aristokatz and T.A.I.L.S.  Please follow them on Facebook now!